Coco became the youngest WTA champion in 15 years during her impressive run in Linz, Austria. Her win was extra unique coming into the tournament as the lucky loser, which means she didn’t qualify, but earned a spot when another player dropped out due to injury. Hats off to Coco!

The ITF released a landmark global tennis report that will help them measure their goals to impact growing and retaining participation in our sport. A few interesting stats: 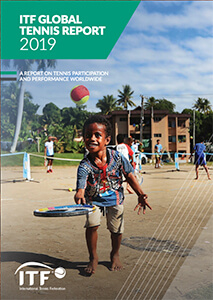 Vessel is known for producing high-end bags for work, travel, golf, and just about anything else you can imagine. Now they’re offering four new bags for the tennis community. Their Baseline Collection includes two racquet bags, a backpack, and a tote. These are well worth a look, and we’re excited that players have another choice to stash their gear.

Only a handful of players on tour can deliver this kind of speed and defense. During this ten-shot rally, Ymer is pushed around but manages to return two overheads to stay in the point and ultimately delivers a down the line winner. Talk about a downer for his opponent João Sousa.

During her match against Aliaksandra Sasnovich from Belarus at the Kremlin Cup, Latvian Sevastova produces a stunning pass to break her opponent at 5-5 in the second set. In case you’re wondering, she followed up the break to seal the win.