An Overview of the Different Parts of a Tennis Racquet

With a Helpful Diagram

If you’re just getting started with tennis, then it can be beneficial to have a thorough understanding of the parts of a tennis racquet. This way, when friends, coaches, or teammates reference a part of the racquet, you’ll have a clear understanding and can speak knowledgeably about each component yourself.

If you’re purchasing your first racquet or finding a new racquet, it can also be tremendously helpful to understand each part and how it impacts your racquet’s performance, so that you can better evaluate and select a racquet. Once you’ve learned about the parts of a tennis racquet, be sure to check out our detailed guide to the best tennis racquets for 2022.

Parts of a Racquet Video

Parts of a Tennis Racquet Video

Join me as I walk you through each part of a tennis racquet:

Here are timestamps for the different sections of the video if you’d like to jump directly to them:

You’ll find detailed descriptions of each part in the sections or this article that follows.

Over the years, racquet technology has evolved leaps and bounds; however, the core parts of a tennis racquet have, for the most part, remained constant.

Here’s a diagram of the Babolat Pure Aero you can use as a point of reference. 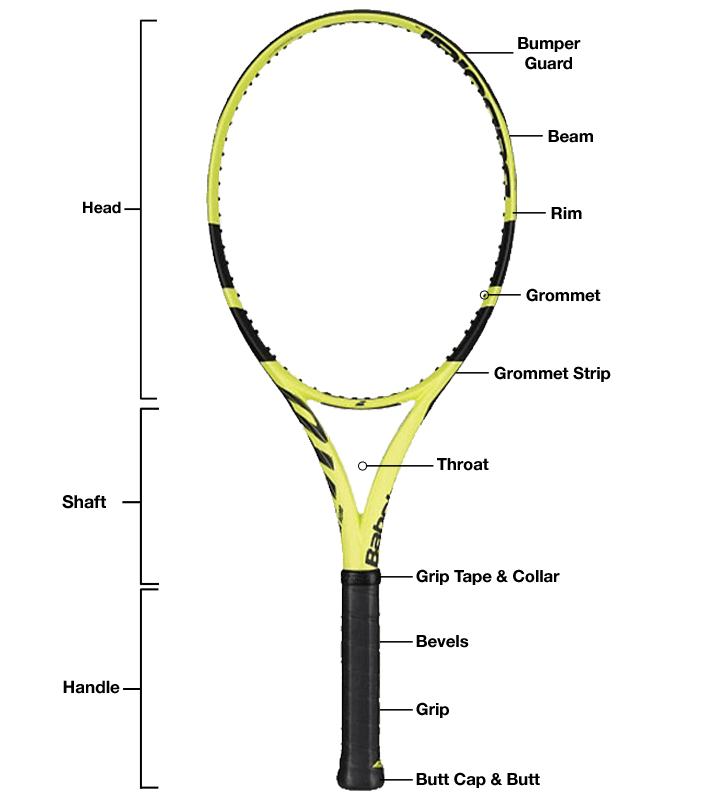 Parts of a Racquet vs. Specs

It’s worth noting the difference between the various parts of a tennis racquet and a racquet’s specs.

The parts of a racquet refer to the name of each component that all racquets share while the specs are the measurable nuances that make each racquet unique, such as a racquet’s weight.

Both are useful to understand, especially when buying a new tennis racquet. However, for this article, we’re focused on the parts.

Let’s break down the individual components of a tennis racquet with a brief explanation of each part. 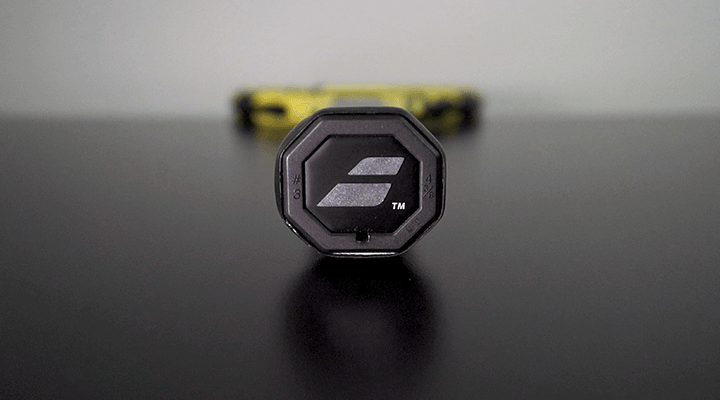 The butt cap refers to the piece of plastic that increases the size or flares out the bottom of a racquet’s handle, which helps ensure the racquet stays put in a player’s hand.

Some butt caps have removable trap doors, which, when taken off, can serve as a useful location for adding material to customize a racquet’s weight.

Racquet manufacturers will commonly print their logo as well as the size of the racquet’s handle as well. 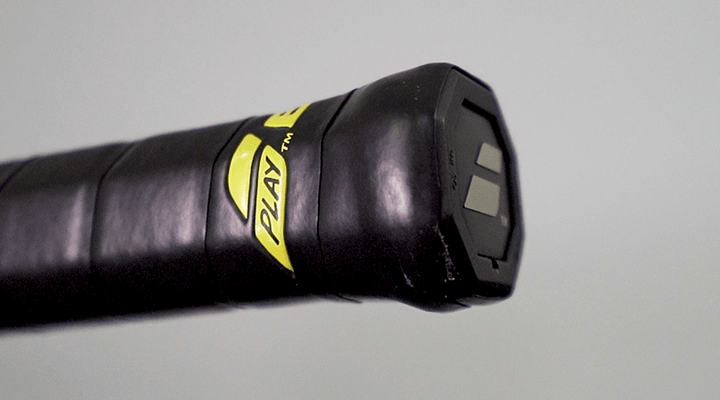 While the butt cap is the piece of plastic at the end of a racquet’s handle, the butt refers more generally to the handle’s bottom. 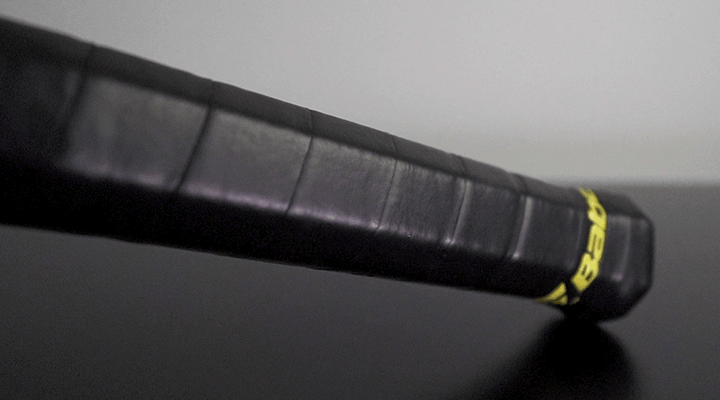 The handle refers to the entire length of the area where a player places their hands to hold the racquet.

Extended length tennis racquets typically come with longer handles to increase the overall size of the racquet, which in turn provides players with more leverage and power.

The circumference, or the length of the outer edge of a tennis racquet’s handle, range from 4 inches to 4 ⅝ inches. It’s important to select the correct size handle to ensure comfort and limit the possibility of injury from a handle that is too small or too large. 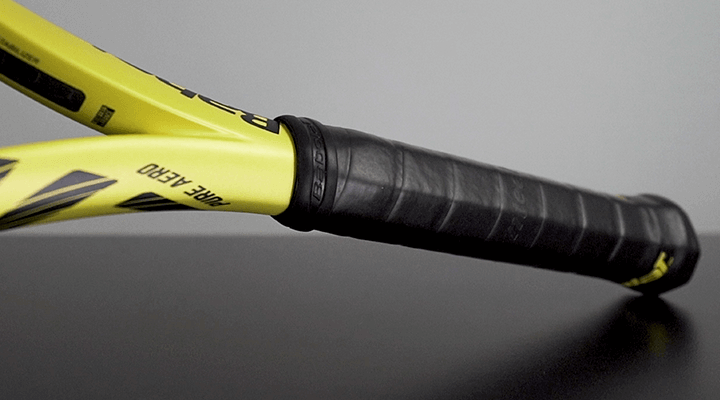 The grip of a tennis racquet is the outer covering of a racquet’s handle, which provides a cushioned surface to protect a player’s hand from the harsh surface of the handle, while also providing traction that ensures a firm grip to prevent the racquet from slipping.

If needed, you can swap out the original grip with a replacement grip or wrap an overgrip on top of the stock grip for extra traction and sweat absorption. 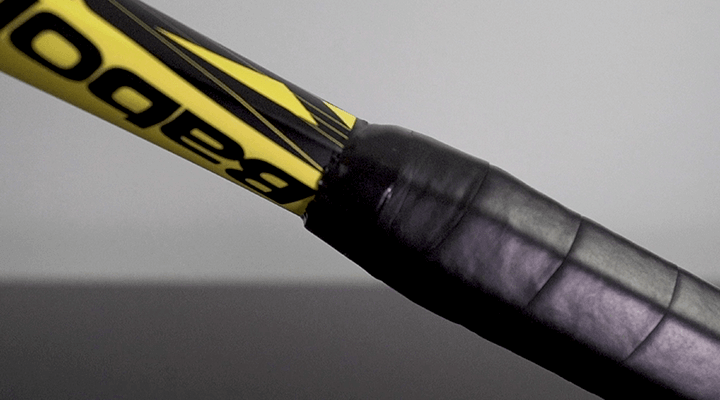 At the top of the racquet’s handle, you’ll find grip tape that secures the grip to the racquet and prevents it from unraveling. 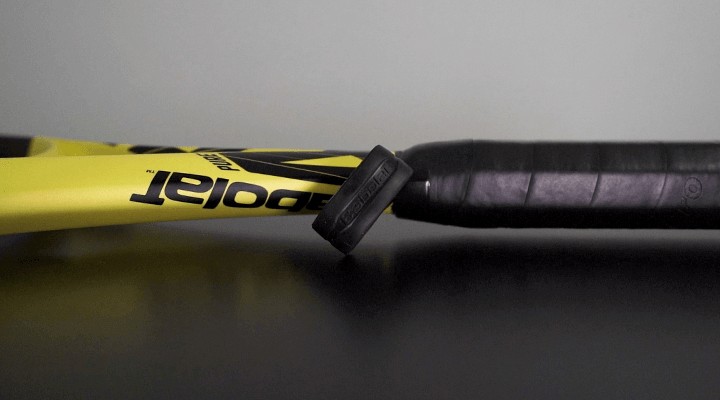 Some racquets will come with a rubber collar that fits over the top of the grip tape for extra security, which can also secure an overgrip as an alternative to standard grip tape. 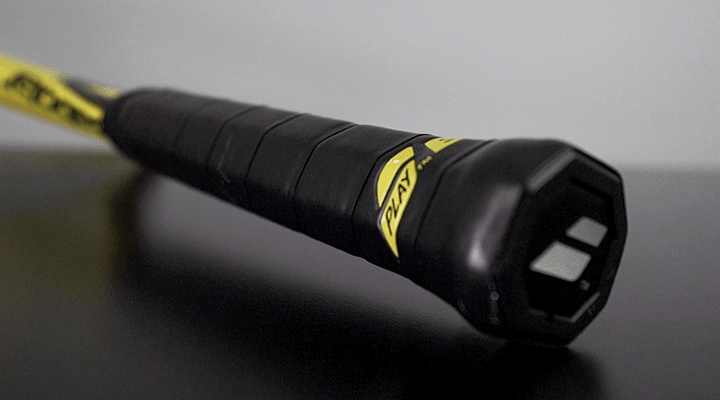 A racquet’s handle has eight sides or bevels, which help prevent the racquet from twisting or rotating in a player’s hand. They also serve as useful guides when learning how to grip a tennis racquet. 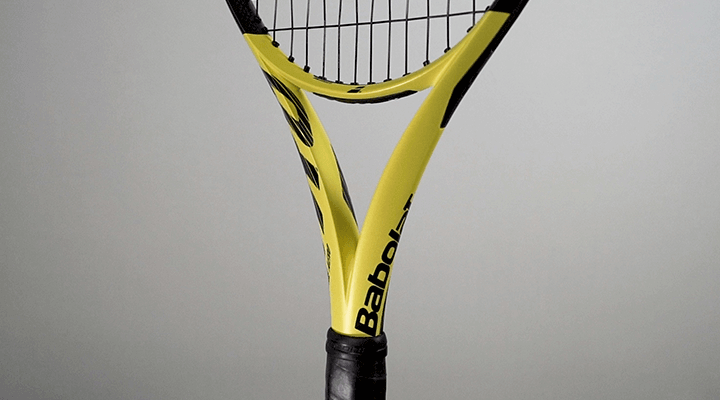 The shaft is the part of a tennis racquet that extends between the head and the handle, which will either have an open or closed throat.

Older wooden racquets typically feature closed throats, while virtually all modern racquets have open throats, which splits into two sections and extends outward to begin the formation of the head, as does this racquet.

The throat’s design is a primary contributor to a racquet’s flex. A “stiff” racquet will often provide less flex at the throat to help generate additional power when hitting. 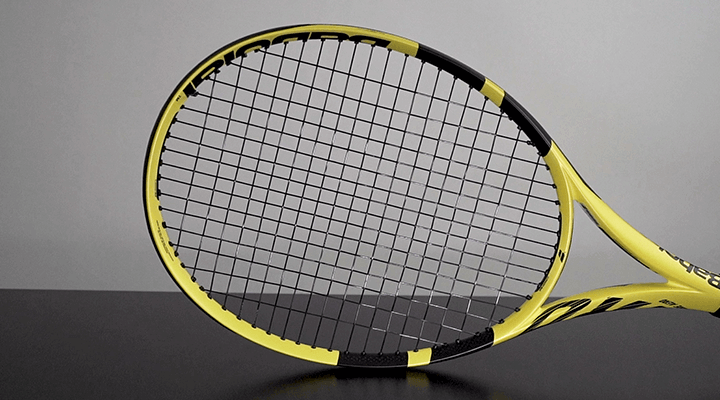 The head refers to the entire oval portion of the racquet, in which the strings are installed to create the hitting surface.

Head sizes can vary significantly from racquet to racquet. However, generally speaking, most head sizes will typically fall between 95 and 110 square inches. For beginner racquets, we recommend 100 square inches or greater, which allows for a higher margin of error. 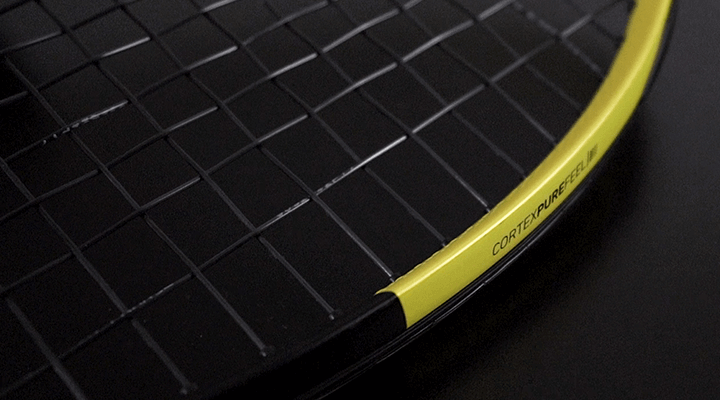 The rim of a tennis racquet refers more specifically to the outside edges of a racquet’s head, which you can think of like the edge of a cup. 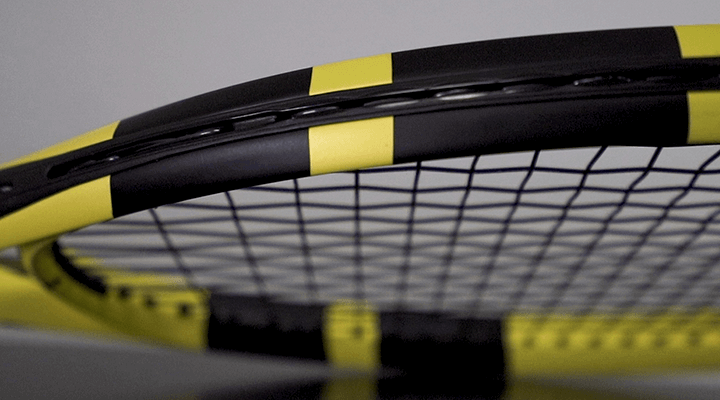 The beam is often an overlooked part of a racquet, which can have significant implications on overall racquet performance.

Power racquets will tend to have a wider beam, which increases the stiffness while allowing the strings to move more freely and, therefore, generating additional power.

On the other hand, control racquets typically have smaller beams, which makes for a more flexible frame while limiting string movement, resulting in added control.

You can easily compare the beams of various racquets by placing them on a table or the ground side by side, which is worth considering when purchasing a new racquet. 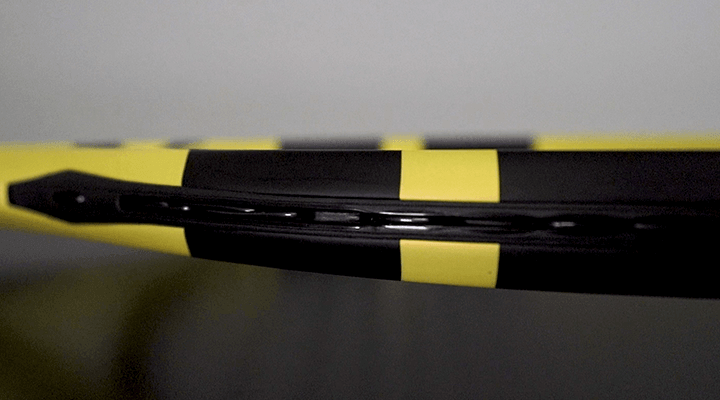 Around the racquet’s head, you’ll find plastic grommet strips. They are inserted through the side of the frame to protect the strings from the sharp edges of the drilled holes that allow the strings to pass through. 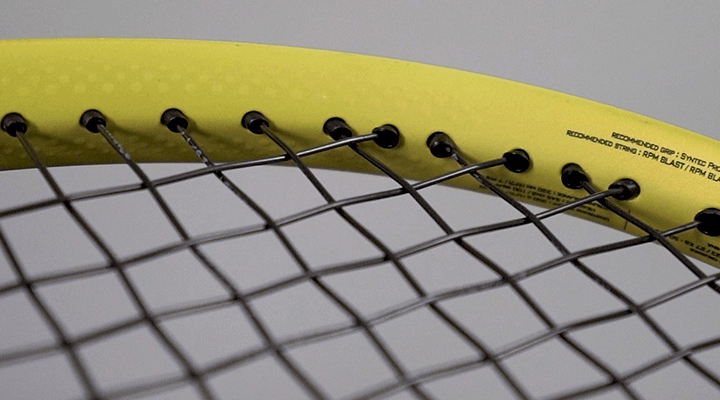 The individual barrels or tunnels along the grommet strip that insert through the frame are called grommets.

Sometimes, the width or design of the grommets changes to allow or constrict the movement of the strings.

With power racquets, you’ll be more likely to find grommets that are wider, allowing for free movement of the strings, while control racquets will have narrower grommets to help constrict movement. 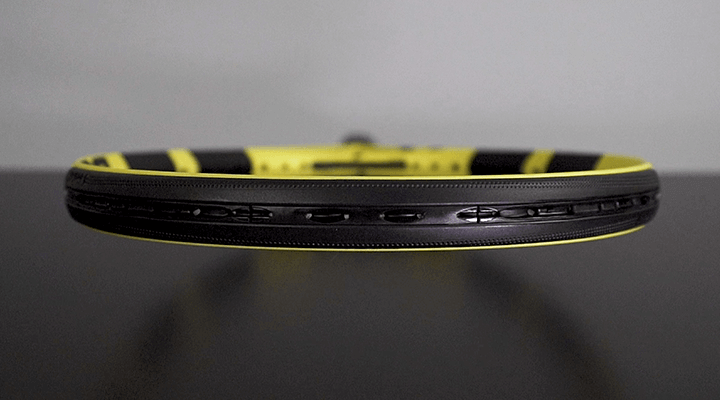 You’ll find a bumper guard at the top of a racquet’s head, which helps protect this area and the strings as it periodically scrapes or comes in contact with the court.

Despite their durable plastic material, bumper guards will require replacement to protect and prolong your racquet. If not replaced, the frame may be exposed and lead to a crack or premature breakage. 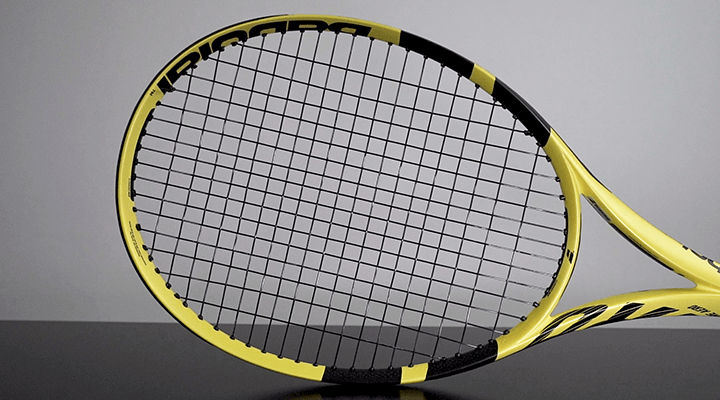 Tennis strings are a thin piece of material installed throughout the head of the racquet, which provides the flat trampoline-like hitting surface.

Tennis string comes in a variety of gauges, or thicknesses, and materials, and the type of string you use can have a tremendous impact on overall racquet performance.

Furthermore, the tension you string a racquet can directly impact power, control, spin, and durability. 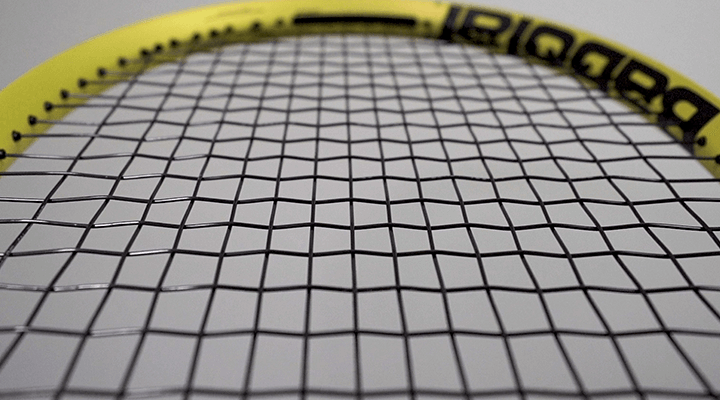 The strings that run vertically within the head of a tennis racquet are the mains. 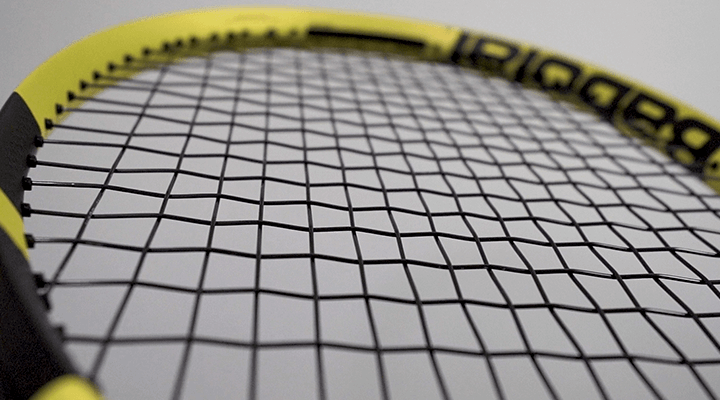 The strings that run horizontally are the crosses. 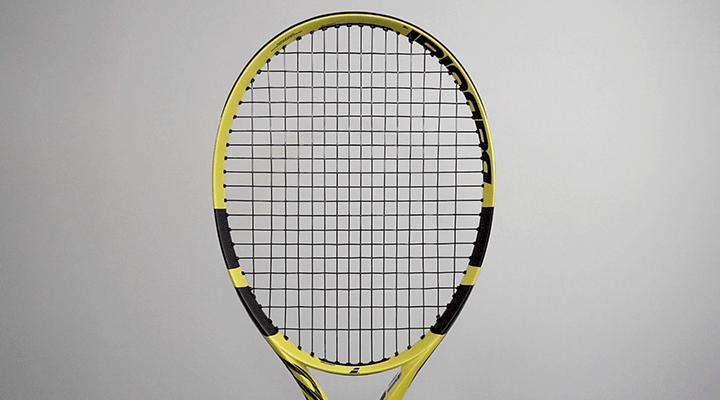 When woven together, tennis strings form the face of a tennis racquet.

Hopefully, you found this article on the different parts of a tennis racquet useful. If you have any questions, we’d love to hear from you in the comments. We’re here to help!

Join Now
The last comment and 11 other comment(s) need to be approved.
4 replies