Everything You Need to Know

X-One Biphase is a premium multifilament string that combines the best of Tecnifibre’s technologies into a single string to produce power, comfort, and gut-like feel.

One of the string’s standout qualities was comfort. Even strung at a higher tension, X-One Biphase still retains its cloud-like comfort, which is ideal for players suffering from tennis elbow or simply looking for an all-around arm-friendly string.

However, X-One Biphase’s star quality was its raw power, which is at the top of its class. The ball jumps off the strings, making for a really fun playtest, especially when I had the opportunity to crank a few winners.

Combine the string’s comfort level with its power, and it makes for a unique combination where the string is naturally comfortable on your arm, and you don’t have to work too hard or strain your arm to generate pace.

While the string’s slick coating contributes to its power and comfort level, it did leave us longing for a bit more grip. However, after about 30 minutes of playtime and a little extra focus on generating topspin, I began to find my rhythm.

X-One Biphase is an all-around terrific multifilament string that’s great for players looking for extra comfort and some extra pop.

Where to Buy X-One Biphase

Key features for X-One Biphase include:

All in all, Tecnifibre’s X-One Biphase packs a technological punch to bring players of all levels a top-notch multifilament string that many will find to be one of the best synthetic alternatives to natural gut.

When it comes to packaging, Tecnifibre has delivered X-One Biphase in style. Each string package features a matte black finish with a gold highlight that bears the string’s name and gauge. 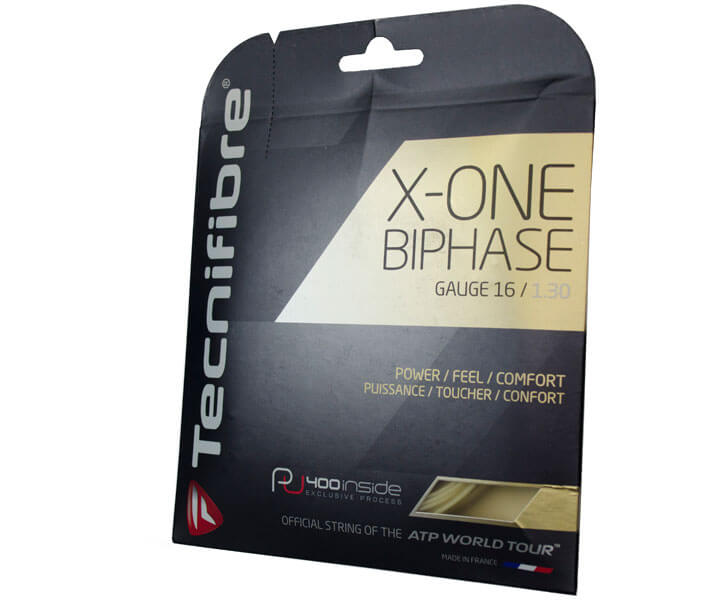 The bottom right corner of the package’s front offers a small peek view of the string, while the back of the package showcases the string’s key features and a useful graphic to help players picture the makeup of the tennis string. 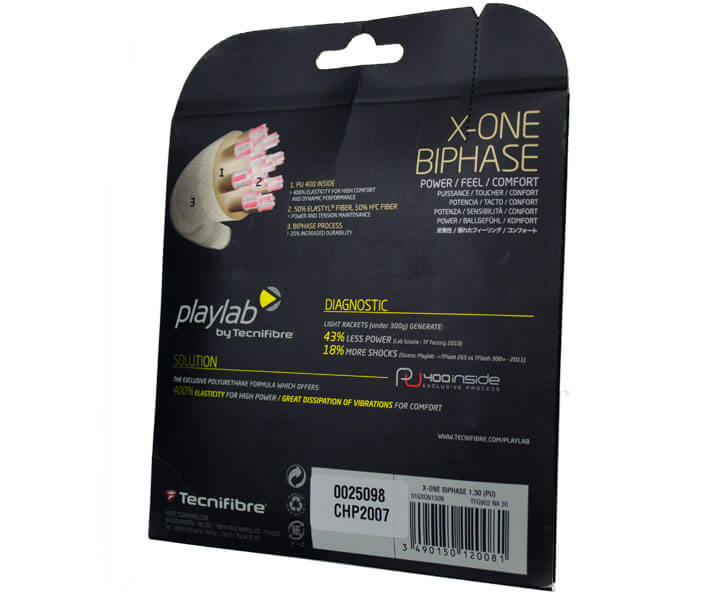 It’s easy to open the strings with a simple tear from the top left of the packaging, which is perforated.

A quick pre-stretch of the strings removed the limited coil memory that was retained by the strings from packaging and made it very simple to maneuver during stringing.

At first, I did expect the thicker 16 gauge that I playtested to give me a little trouble since it’s a soft multifilament, but I didn’t run into a single problem. I simply made sure to keep a sharp point at the end of the string anytime I ran into a tight spot or blocked hole.

Stringing the crosses was a breeze as the string’s slick outer coating helped it easily slide through the mains. Because X-One Biphase is a softer multifilament, I didn’t experience any issues tying knots. 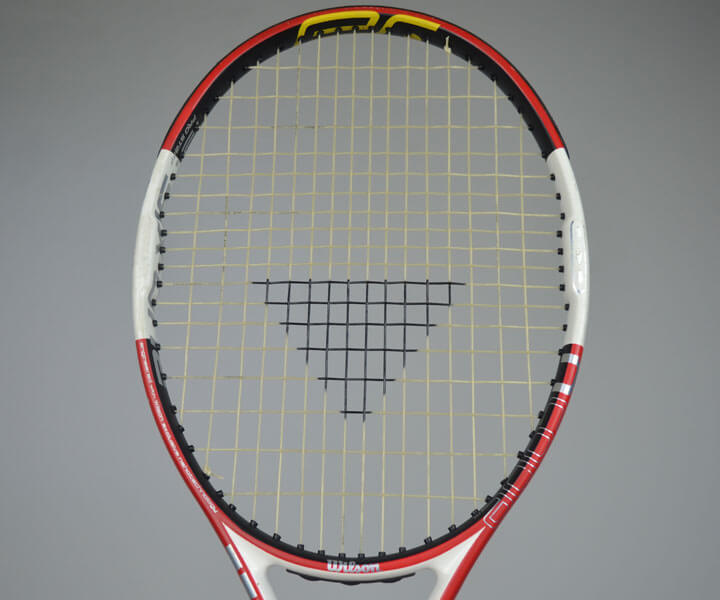 Overall, I was impressed with the durability of X-One Biphase, which undoubtedly was helped by the fact that I went with the thicker 16-gauge string.

Generally, multifilament tennis strings designed to be soft on the arm and produce a gut-like feel tend to lack durability to a degree, which is simply a tradeoff that comes with the territory when you go with this family of tennis strings.

However, I was happy to find that compared with other multifilament strings I’ve playtested, X-One Biphase held up well, especially under the heavy topspin of my forehand, which is frequently the cause of broken strings for me.

I went with the thickest gauge because I’m a chronic string breaker, so I appreciate the extra life that this gauge provided me. It turned out that I was happy for doing so, as some slight notching in the strings was apparent even after an hour of play.

I did eventually break the strings after eight hours of play, but I felt that for the type of string, this was a great life expectancy, especially considering my style of play.

Helpful Tip
The durability of your tennis strings is dependent on a wide range of factors, including the gauge, or thickness, of the string, the type of grip you hold for your groundstrokes, how hard you hit, the tension you string at and other elements even including the weather.

As you evaluate tennis strings and the importance of durability compared with other factors like comfort, it’s important to consider your style of play. A big-hitting Division 1 college-level player may find a particular string doesn’t hold up well to their game, but that doesn’t mean the string isn’t durable, especially relative to other strings in the same family.

With tennis strings, it’s frequently about tradeoffs, so make sure you weigh durability appropriately against other factors like comfort.

What X-One Biphase lacks in durability to a small degree, it completely makes up for in comfort, thanks to Tecnifibre’s proprietary polyurethane PU 400 and the cushiony Elastyl fibers that make up 50 percent of the string’s composition.

The shock absorption of the string was apparent from my first stroke, and it was delightfully forgiving even with the higher 60-pound tension that I used to control some of the power.

I specifically recall one low forehand that I dug out and hit off-center outside of the sweet spot. I was surprised by how gentle it was on my arm compared with the shock that I might have felt with a more durable polyester string.

All in all, X-One Biphase is a super comfortable tennis string that would be a great fit for anyone suffering from tennis elbow or simply looking to reduce shock and vibration to their arm, perhaps with a stiffer racquet frame.

If there’s one thing that’s going to surprise you about X-One Biphase, it’s the string’s raw power – a feature that made it super fun to use.

Based on Tecnifibre’s specs and some initial research, I expected it to bring plenty of power, so I intentionally strung it at a higher 60 pounds to maintain a bit more control and bring the power level down a bit. However, even at the higher tension, the extra pop was still apparent.

Generating extra pace when hitting felt automatic, and I never felt like I had to force the ball over the net. Where I really enjoyed the power was on my serve, where I was able to crank it up, and the ball would jump off the strings.

Helpful Tip: If you’re at all concerned about the added power of X-One Biphase, I’d encourage you to up the tension a bit. My approach would be to use X-One Biphase as part of a hybrid setup with control-oriented mains.

As I was getting comfortable with X-One Biphase, one of the challenges that I did find with my groundstrokes was that the string didn’t have the grip that I’m used to with some of the hybrid string setups that I’ll use.

As a result, I found a few groundstrokes sailing a few feet long, so I had to adjust and focus on generating more topspin to help keep the ball in play.

After about an hour of hitting and once the strings started to settle a bit, it wasn’t an issue. However, similar to dropping the power level a bit, players who hit with a lot of topspin and expect that extra bite from their strings would likely want to string X-One Biphase as part of a hybrid string setup.

Another option would be to drop down to the 17 gauge strings, which should provide you with a bit more grip, although a heavy topspin player might avoid this due to a decrease in durability and life expectancy of the string. If price isn’t much of an issue, then this might be an excellent option for you.

Along with X-One Biphase being an incredibly comfortable string to play with, I found it to be highly responsive, which might be a little counterintuitive with the high power the string offers.

The great touch of the string was, not surprisingly, most apparent at the net hitting volleys, where I felt like I had plenty of control and could easily direct the ball wherever I wanted.

Overall, I felt like X-One Biphase did a terrific job of holding its tension, which would have been aided by the pre-stretching that I did before stringing.

The settling that occurs after 30 or so minutes of play and is extremely common with many string sets was negligible, and I found the strings continued to hold their tension well throughout my roughly eight-hour playtest.

This one was a bit of a surprise for me. I expected the strings to move much more than they did. After about 15 minutes of play, the strings had barely even budged.

The higher string tension helped limit string movement, but typically I find that my forehand is good for pushing the strings all over the place. Even after a full hour of play, there was less movement compared with other multifilaments.

Join Now
The last comment needs to be approved.
15 replies