Despite being the youngest Grand Slam, which started 28 years after Wimbledon in 1905, the Australian Open is now the second highest-paying professional tennis tournament worldwide, right behind the US Open.

Men and women will play for equal prize money at the Australian Open, with the singles champions taking home a staggering $2,975,000 and the runner-up earning just over half that amount or $1,625,000. These amounts represent a low 3% increases versus 2022, which is the magic number, as all rounds have increased by that amount.

In doubles, the sums are equally impressive for men and women, with the winning pairs splitting a $695,000 check and the teams who land the runner-up position divvying up $370,000. Like singles, nearly all doubles rounds are hitting roughly a 3% increase over the prior year.

The modest increase in 2023 prize money at the Australian Open isn’t surprising, considering organizers limited fans to 50% capacity in 2022 and as low as 30% in 2021, a direct hit to tournament revenue. However, with attendance restrictions lifted, this year’s tournament will likely result in a more impressive increase in the purse for next year.

Overall, this year is an exciting year for players competing in Australia, with the Australian Open’s tournament director, Craig Tiley, sharing that for the first time, more than $100,000,000 is up for grabs throughout the summer at all tennis tournaments in the country.

Keep reading for everything you need to know about the 2023 purse, including a complete breakdown by round and historical data for comparison and reference.

How the Aus Open is Funded

How the Australian Open is Funded

In other words, the Australian Open generally brings enough cash to fund its impressive prize money. For context, the tournament generates revenue from a few key areas, including sponsorships, broadcasting rights, ticket sales, concessions, and merchandise.

Although exact figures aren’t available for a revenue breakdown of the Australian Open, we can glean some insight from Wimbledon and the US Open. Here’s a look at how those tournaments faired in 2017. 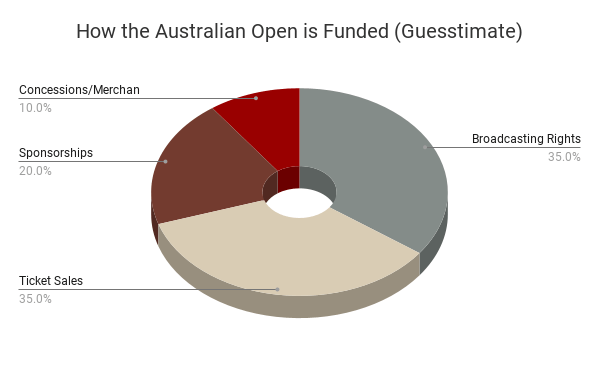 The US Open has significantly higher attendance, so their ticket sales far exceed that of Wimbledon, which is also likely the case for the Australian Open, which can host more fans. Here’s a quick comparison of attendance numbers in 2019 for each of the majors.

As a result, the Australian Open has consistently delivered some of the biggest sums in prize money. Here’s a look at how the tournament compared to the other three Grand Slams in 2022.

Compared to the US Open, the highest-paying Grand Slam, the Australian Open offered 14% less prize money. In contrast, they delivered 16% more than the French Open, which has the smallest purse.

Despite setbacks for the tournament, which included a $78 million loss for running the 2021 event, I’d fully expect the Australian Open to remain one of the highest-paying tournaments, especially considering their aggressive three-phase expansion set to complete in 2023.

At a high level, prize money at the Australian Open breaks down by discipline, including singles, doubles, mixed doubles, and qualifying rounds. Here’s a look at that distribution for available 2023 data. 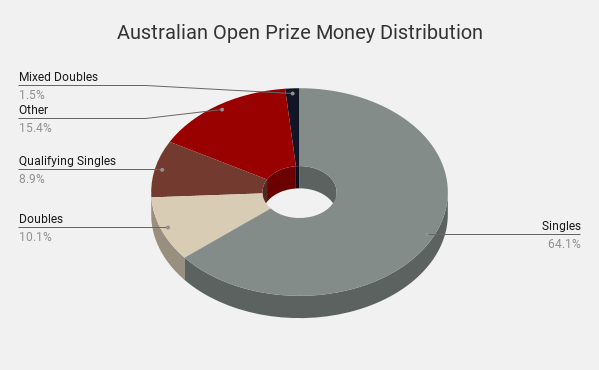 However, consistent with other tennis tournaments, the Australian Open’s prize money breaks down further by round, with players earning more the further they progress. For context, here’s a table of payouts for the men’s and women’s singles for 2023 by round, including qualifiers.

Overall, investment in singles represents the lion’s share of prize money, which isn’t surprising as it draws the most viewership.

Shortly after the new millennium in 2001, the Australian Open followed in the US Open’s footsteps, instituting equal prize money for men and women. Although it came over 20 years after the triumph in Flushing Meadows, it was another huge milestone for the sport.

Shortly after, the French Open and finally, Wimbledon would follow suit. Here’s a look at when each of the Grand Slams switched.

Although it’s worth noting that prize money at the Australian Open was equal for men and women for a few years during the 80s and 90s, it slid backward for a few years until they fully committed in 2001.

The Australian Open has experienced significant growth in prize money since we ushered in the new millennium, with increases every year, even during the pandemic when ticket sales were heavily restricted.

For 2023, prize money will improve by 3.38% for players. On the surface, the increase might not seem overly impressive. However, considering significantly lower ticket sales over the past few years, it’s easier to appreciate the effort from organizers to maintain improvements.

The following tables break down prize money by round since 2001 for men and women. You can scroll left to right to view the entire data set.

For comparison, I’ve converted AUS dollars to US Dollars and Sterling pounds, which I calculate using the prior year’s exchange rate on the day of the final for a close approximation of value.

Please note that all historical data for US Open prize money in British sterling pounds considers exchange rates on the day of the final for the years listed.

Please note that all historical data for US Open prize money in euros considers exchange rates on the day of the final for the years listed.

These figures are not yet released for 2022.

These figures are not yet released for 2022.

Here’s a recap of historical data for Australian Open prize money by year, with a graph helping visualize growth over time. 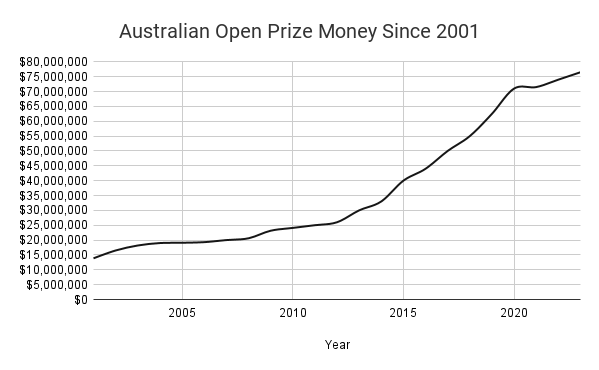 Please note that all data is in AUS dollars.

Australian Open prize money is always a hot topic, so it’s common for fans to have several questions relating to the subject. Here are some of the most common we hear.

Yes. The local government taxes player earnings for tennis tournaments. Therefore, for the Australian Open, players are taxed at the current Australian tax rate, ranging from 0-45%, depending on a player’s earnings.

It’s worth noting that players usually will not pay taxes on their prize money to their local government due to Double Tax Treaties that typically exist to prevent double taxation.

No. Australian Open junior tournaments are amateur events, so participants do not earn prize money. However, they do earn ranking points for their participation.

Yes, in 2023, the US Open is allocating $7,433,600 in prize money to the singles qualifying tournament. In singles, 128 players compete for one of 16 available qualifying spots.

If players lose in any qualifying round, they earn money, which increases the further a player progresses. For example, this year, a player who loses in the final round of the qualifying tournament earns $55,150.