The 2022 US Open in Flushing Meadows, New York, is scheduled to take place from Monday, August 29 to Sunday, September 11, and we’re expecting this year’s prize money to be the biggest in history.

In 2021, the US Open’s prize money returned to pre-pandemic levels for an all-time high of $57,462,000, up 0.4% from 2019. However, the USTA adjusted its allocation to better support lower-ranked players participating in qualifiers and earlier rounds in the main draw.

With attendance at tournaments worldwide increasing and full capacity expected for the 2022 US Open, expectations for prize money are high, with the year’s last Grand Slam looking to set another record payout. This guide shares everything we know about this year’s purse to date.

How the US Open is Funded

How the US Open is Funded

Owned and operated by the United States Tennis Association (USTA), the US Open is one of the world’s biggest sporting events, drawing 738,000 fans in 2019 before the pandemic slowed things down for a few years.

Like other tennis tournaments, the US Open generates roughly 85% of its revenue from sponsorships, broadcasting rights, tickets, concessions, and merchandise, according to Forbes. However, they have another trick up their sleeve, membership dues from players across the country.

Here’s how the tournament’s 2017 revenues broke down: 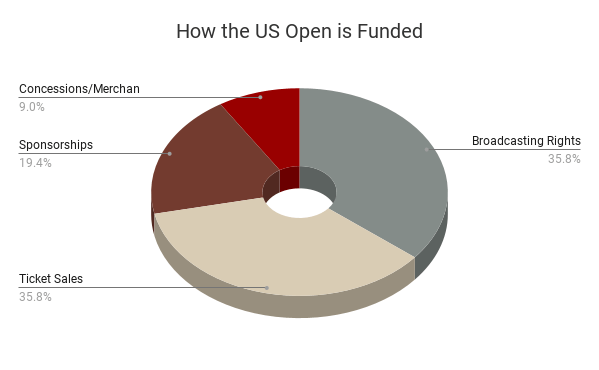 In total, the US Open generated an enormous $350 million in 2017, which is how the tournament can pay such hefty sums in prize money. Of course, the US Open doesn’t pocket all that money. There are a lot of costs to cover, from upkeep and expansion of the grounds to marketing, insurance, USTA and tournament staff, player development, and their never-ending work to grow the sport; it’s a big enterprise.

Despite the size and scope of the USTA, they still manage to consistently dish out more prize money than any other Grand Slam. Here’s a look at how the US Open compared to the other three majors in 2019 before the pandemic took hold.

With the tournament’s aggressive expansion in recent years, it’s safe to assume that the US Open will remain the highest-paying tennis tournament for many years, continuing to cement its place as one of the most prestigious sporting events worldwide.

As you might expect, the US Open distributes prize money in a tiered fashion where a player’s earnings increase the further they make it in the event, which is standard for nearly all tennis tournaments.

As a point of reference, here’s a table of payouts for the men’s and women’s singles in 2021.

Singles is one of many events held at the US Open, so we can also break prize money down by discipline, i.e., singles, doubles, mixed doubles, etc., and a separate amount for qualifying rounds. Here’s how those numbers broke down for last year’s tournament. 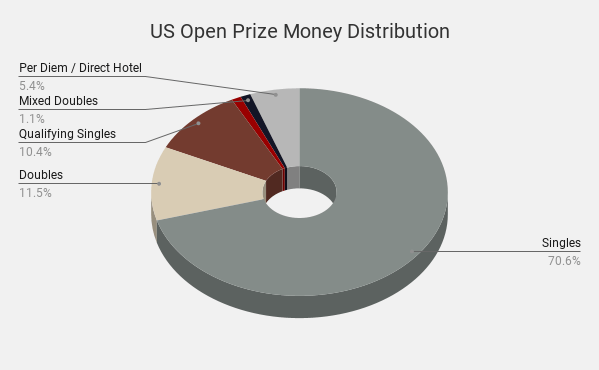 Reviewing the numbers above, you can begin to understand where the tournament prioritizes its prize money, which viewership and event popularity heavily dictate.

In 1973, shortly after the Open Era began, the US Open became the first Grand Slam tournament to institute equal prize money for men and women. Although it’s worth giving props to the US Open for their actions, Billie Jean King’s lobbying and her threat of a tournament boycott were undeniably catalysts for their decision to change.

It would be over 20 years before the Australian Open followed suit in 2001 to offer equal prize money to women. Here’s a look at when each of the Grand Slam tournaments moved to equal pay.

Since 1968, the US Open has increased prize money nearly every year. Only on five occasions has it decreased or remained the same, with the most significant decline coming in 1971 with a 9.27% drop. On average, the tournament’s prize money has increased by 17% each year.

For 2022, we expect an increase in prize money for players as the event returns to full capacity. Furthermore, the tournament will likely continue distributing more funds to earlier rounds to improve opportunities for lower-ranked players, which they did last year.

Based on historical data, we estimate that the US Open will increase its prize money in 2022 by roughly 5% compared to 2021. Last year, the tournament announced official prize money numbers a little later on August 23. However, in 2019, the news came on July 18, so we can likely expect to learn specifics in late July.

Please note that all historical data for US Open prize money in British sterling pounds considers exchange rates on the day of the final for the years listed.

Please note that all historical data for US Open prize money in euros considers exchange rates on the day of the final for the years listed.

Here’s a recap of historical data for US Open prize money by year with a graph helping visualize growth over time. 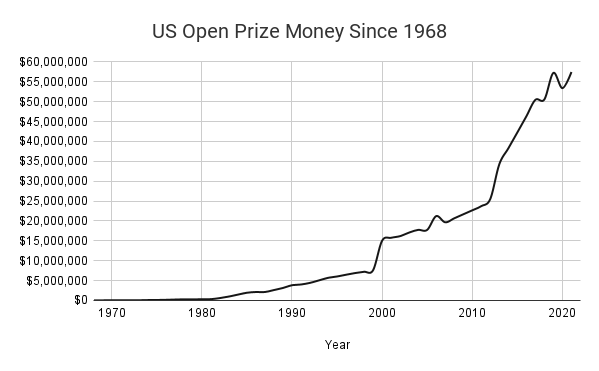 US Open prize money is always a hot topic, so it’s common for fans to have several questions relating to the subject. Here are some of the most common we hear.

Is US Open prize money taxed?

Yes. The local government taxes player earnings for tennis tournaments. Therefore, for the US Open, players are taxed at the United States tax rate, ranging from 10-35%, depending on a player’s earnings.

It’s worth noting that players usually will not pay taxes on their prize money to their local government due to Double Tax Treaties that typically exist to prevent double taxation.

No. US Open junior tournaments are amateur events, so participants do not earn prize money. However, they do earn ranking points for their participation.

The US Open’s prize money declined 6.70% in 2020 due to the pandemic when fans were not allowed to attend the tournament. Ticket sales, concessions, and merchandise represent over 40% of the tournament’s revenue, so a reduction was inevitable without fans.

Considering the challenges that faced the tournament that year, it’s impressive they retained most of the prize money, let alone run the event.

Yes, in 2021, the US Open allocated nearly $6 million in prize money to the qualifying tournament. Sixty-four players compete for one of sixteen available qualifying spots. If players lose in any qualifying round, they earn money.