Wimbledon 2022, scheduled to take place June 27 – July 10, is right around the corner, and prize money is always a hot topic.

Despite the ATP and WTA stripping Wimbledon of their ranking points for 2022, prize money exceeds the previous year’s level, underscoring the tournament’s commitment to players. Keep reading for a complete breakdown.

How Wimbledon is Funded

How Wimbledon is Funded

Wimbledon, or The All England Tennis & Croquet Club (ALTEC), is a highly prestigious and exclusive tennis club with only 500 full, life, and honorary members, so it’s fair to question how The Club funds the tournament.

According to Forbes, the tournament generates money from sponsorships, broadcasting rights, tickets, concessions, and merchandise. In 2017, here’s how their $289 million in revenue broke down roughly.

The Championships use these funds to pay staff, maintain the Club and its impeccable grounds, and pay players prize money.

If there’s a surplus in funds, 90% of it goes to the Lawn Tennis Association (LTA) to invest in British tennis.

It’s worth noting that Wimbledon earns less than some of the Grand Slam tournaments due to its dedication to a “clean court philosophy” where they don’t place advertisements throughout the grounds as is common at nearly all sporting events these days.

As a result, prize money isn’t as high as it could be. Here’s a look at the 2019 prize money for all four of the tournaments:

For years Wimbledon has focused on a select few partners, like Slazenger, that appreciate the Club’s dedication to maintaining a signage-free environment that focuses on the Wimbledon brand while reducing distraction for the players.

Like other tennis tournaments, Wimbledon distributes its prize money to players based on performance. The further a player progresses through the event, the more money they make.

Here’s an example for gentlemen’s and ladies’ singles from 2021.

Wimbledon also distributes prize money at varying degrees depending on the event. Here’s how the totals for each discipline and qualifying broke out in 2021. 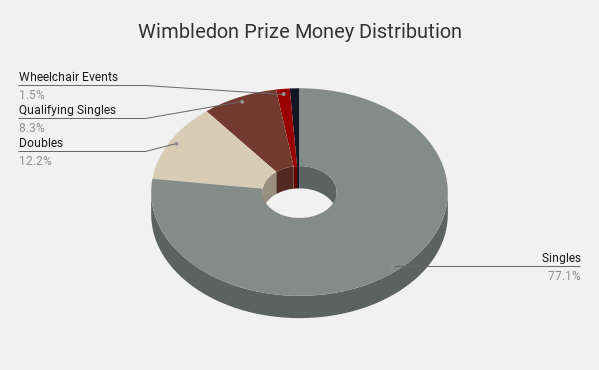 Unsurprisingly, these amounts correlate with the general popularity of the events, which would correspond with viewer demand.

On February 22, 2007, Wimbledon’s chairman, Tim Phillips, announced that the tournament would offer equal prize money to men and women starting that year and moving forward. That year the prize money was 700,000 for men’s and women’s singles.

Although the gap between pay had been closing between men and women for years leading up to 2007, The Championships were the last of the four Grand Slam tournaments to offer equal pay. Here’s when each major started offering equal prize money.

Here’s a look at the prize money for five years leading up to 2007 for men’s and women’s singles.

For years, Wimbledon sighted that men played best of five sets vs. best of three sets for the women, and men drew bigger audiences. However, these claims were unsubstantiated as uneven media coverage and recent audience data prove the women’s side is thriving despite inequality.

Wimbledon has increased its prize money nearly every year since the Open Era began in 1968. However, 2021 marked the first year of a decline as the tournament recovered from the global COVID-19 pandemic, which forced The Championships to not run in 2020.

However, a new wrinkle presents itself in 2022. Due to Russia’s unprovoked invasion of Ukraine, Wimbledon decided to decline entries for Russian and Belarusian players into the tournament. As a result, the ATP and WTA jointly decided to remove ranking points at Wimbledon.

The following tables showcase how prize money breaks down for each round of the singles, doubles, and mixed doubles events.

Please note that all historical data for Wimbledon prize money in US dollars considers exchange rates on the day of the final for the years listed.

Please note that all historical data for Wimbledon prize money in euros considers exchange rates on the day of the final for the years listed.

Here’s a recap of historic data for Wimbledon prize money for winners across singles, doubles, and mixed doubles. All data is presented in British Sterling Pounds.

Keep in mind that all data is in sterling pounds, the UK’s currency, so you’ll need to translate it to your native currency.

Wimbledon prize money is a hot topic. Aside from what we’ve covered, here are some common questions about the subject.

Yes. Players are taxed on their earnings based on the country they receive prize money. Therefore, for Wimbledon, players are taxed at the United Kindom’s tax rate, which is 40-45% depending on a player’s winnings.

However, players usually don’t have to pay taxes on their money earned at Wimbledon to their local government due to a Double Tax Treaty, which prevents double taxation.

No. Wimbledon junior tournaments are amateur events, so participants do not earn prize money.

Why did Wimbledon’s prize money go down in 2021?

Recovering from the pandemic and not running the tournament in 2020, Wimbledon reduced prize money by 5.2% in 2021 compared to 2019, when the event last ran.

However, the reduction only impacted the singles finalists and semi-finalists, and in some cases, there were increases. For example, qualifiers saw a 17.5% increase in prize money allocation.